Colombia in its Labyrinth

Colombia was on the verge of collapse at the beginning of this century. Violence by Marxist and Maoist guerrillas, paramilitary groups, drug cartels, and renegade state forces was present in every corner of its territory. The country was also hit by the worst economic crisis in its history, and the political equilibrium was precarious.

Businessmen, politicians, military strategists. and normal citizens thought that the country was becoming a failed state, if it was not one already.

Over the next two decades, what happened was something just short of a miracle. Improvements in national security allowed for narco-paramilitary groups to be demobilized in 2006. Ten years later, the FARC Marxist guerrillas, the oldest insurgent group in the hemisphere, signed a peace agreement with the government. Narcotics traffickers and cartels were systematically weakened. Although violence persisted, the homicide rate in 2017 was the lowest recorded since 1975.

Violent forces like the Marxist Fuerzas Armadas Revolucionarias de Colombia (FARC, left, in 2008) and the right-wing paramilitary Autodefensas Unidas de Colombia (AUC, right, in 2006), were a constant threat in the early part of this century. (Photos from Wikimedia.)

The commodity boom between 2005 and 2014 fostered economic growth and attracted investment into the country. Thanks to that increased investment and the revenues generated by oil, the government was able to increase social spending, improve access to education and health services, and invest in infrastructure.

More importantly, programs to alleviate poverty were created and strengthened. In 2014, for the first time in Colombia’s history, the number of households categorized as middle-class surpassed those labeled as poor. Between 2002 and 2018, the portion of the population in poverty decreased by 23 percentage points, from 50% to 27%.

Those improvements were widely celebrated by Colombians and the broader international community. For a brief moment, it seemed possible that the country might finally achieve long-lasting peace and sustained prosperity.

Construction in Bogotá amidst the economic boom in 2015. (Photo by Peter Angritt.)

Recent years have shown that peace and prosperity are not so easily attained, however.

During the “miracle” period, political fragmentation and polarization began to reach critical levels. The country’s leadership was unable to unite Colombians around a national project, a common idea of a shared future, that could at least protect what had been already achieved.

Necessary actions were dismissed because of a lack of consensus and political will to push them forward. Those parties and political coalitions in power were almost exclusively concerned with keeping a patronage system in place and pork barrel spending, both structural deficiencies of the Colombian democracy. Special interests fiercely resisted any attempt at reform, instead pouring money into political campaigns and the pockets of elected officials to assure favorable results. The reform of the justice system, the implementation of progressive tax reform, a more decisive fight against corruption, the diversification and sophistication of the economy, expanding formal employment, increasing the quality of education and health services, and the reduction of development gaps between regions were some of the actions that were abandoned.1

After those projects were put aside, security and socioeconomic improvements began to stall in 2018 and 2019.

Criminal gangs evolved and became powerful actors in some regions, financing their private armies through extortion, illegal mining, land grabs, modern slavery, and drug trafficking. Former paramilitary leaders regrouped after serving their time in jail, and the implementation of the peace agreement with FARC was systematically hindered by the current government.

On the socioeconomic front, the end of the commodity boom and uncertainty in the global economy reduced investment, creating fiscal pressures and curtailing the government’s capacity to continue expanding social spending and investment. Economic growth diminished, and unemployment surpassed 10%. High levels of inequality, informality, and self-employment made almost 4 out of 10 households vulnerable to economic shocks.

It was under these already grim circumstances that the Covid-19 pandemic hit, compounding the multifaceted challenges Colombia already faced.

Since March, at least 28 human rights defenders and social leaders who have denounced the atrocities of illegal armed groups and the military have been assassinated. More than 150 such defenders and leaders have been killed this year. Criminal gangs are the de facto authority in many municipalities and neighborhoods; in some cases, they even enforce the curfews and shelter in place measures mandated by the government. 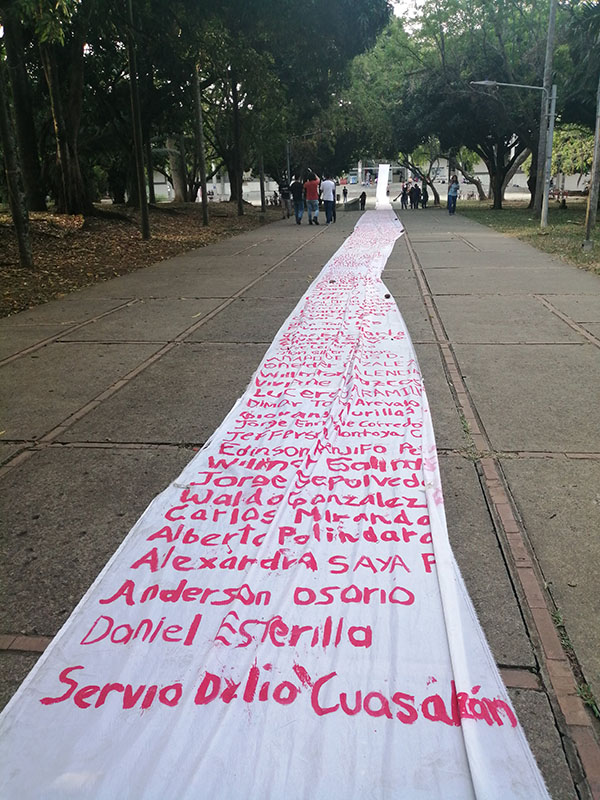 A banner bearing the names of social leaders killed in Colombia in recent years hangs from a library and crosses the campus of Universidad del Valle in Cali, Colombia. (Photo by tefita228.)

In 2020, Colombia could have its worst economic performance in the last 100 years. One study predicts that poverty could also increase by 15 percentage points, creating 7.3 million more poor people than in 2019. By the end of June, the unemployment rate reached 20.1%, the highest among OECD countries.

Paradoxically, the current crisis and a future recovery may present an opportunity for the government and the political class to progress towards a national pact for the future of Colombia.  But if political factions continue to place their interests above those of Colombians and engage in petty in-fighting, the chance for the country to consolidate liberal democracy and create sustainable development for this and future generations will be squandered.

Countries like South Korea and Israel faced similar challenges not long ago. Their societies were able to come together to overcome complex historical, political, social, and economic challenges, actively reshaping their futures. Today, even if they are far from perfect, both nations are regarded as international examples of how to produce structural transformations and improve the well-being of their citizens.

If Colombia does not want to return to the worst years of the previous century, the country needs to be united around a common goal: creating the opportunity for every Colombian to achieve well-being. To make that happen, political leadership must guide the society into a new national program to consolidate and expand the progress made in the last 20 years. Even if they are fiercely resisted by special interests, the reforms mentioned above must be implemented to advance toward that goal. The social movement that began to consolidate from the end of 2019 until the beginning of the pandemic, resembling in some ways what was happening in Chile, could be an important ally in those efforts. Dismissing that movement could prove a fatal error and might bring the country a populist leader eager to capitalize on the existing discontent among important parts of the population. And a populist government is the last thing Colombia needs right now.

The questions that remain to be answered are: is there someone willing to take the lead in trying to unite the country? And if they do come forward, will it be too late?

3 Responses to Colombia in its Labyrinth