Brazilian Youth Mobilize in the Streets and through the Digital, during Coronavirus and Beyond

Brazil is now a coronavirus epicenter; it recently became the country with the second highest number of cases in the world, after the United States. At the time of writing, the number of confirmed cases surpassed 411,000 with over 25,000 deaths. Like Donald Trump, Brazil’s far-right President Bolsonaro’s pandemic-denying response has endangered citizens and led to the firing and resignation of two consecutive health ministers. The Lancet referred to Bolsonaro as perhaps the country’s biggest threat.

The first reported coronavirus death in Rio de Janeiro state was of a Black woman and domestic worker, an early and emblematic warning of the classed and racialized dimensions that the pandemic would take. In urban favelas of Rio de Janeiro and other cities, volunteers have been met with recent, though hardly new, police raids. Recent invasions have killed dozens of residents, including João Pedro, a 14-year-old boy. Coronavirus has not brought an end to violence against poor and Black Brazilians; it has compounded it.

When faced with injustices committed by the state, taking to the streets is among the most powerful tools citizens have. Yet the pandemic raises the question: what can be done when going to the street comes to a halt?

Building upon a long history of mobilizing, Brazilian social movements have confronted Bolsonaro’s anti-poor, violent, racist, and misogynistic rhetoric and policies at every turn. But with social and economic conditions worsening as the pandemic progresses, a range of social movements, urban favela organizers, and other citizens have stepped up even further. They not only speak out against Bolsonaro, but distribute food and supplies (which his administration does not provide), disseminate accurate information, and raise funds for their own communities. Youth movements, typically led by those aged 18 to 24, join forces to provide this kind of frontline aid in communities. But they have also held fast to a vital, long-term struggle: the fight for equitable access to public education.

Through ethnographic research in Brazil, my dissertation examines these youth movements and the practices and politics of their navigating classroom, street, and social media spaces to defend public education alongside struggles against capitalism, racism, and gender inequity. And since the start of the pandemic, I have observed how youth collectives have swiftly amplified their digital strategies. 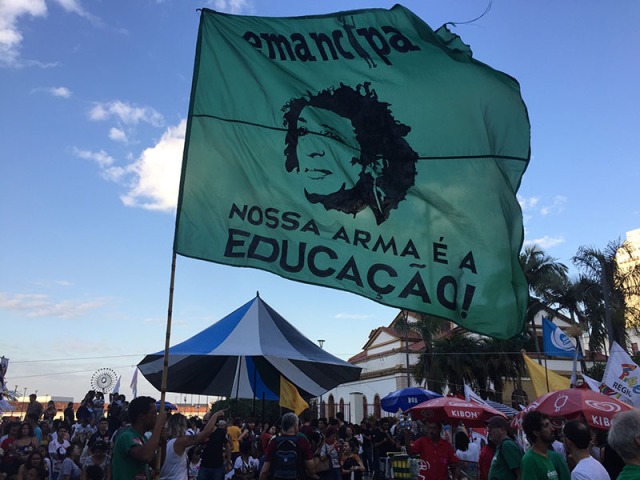 A flag from the popular education movement Emancipa states, “Education is our weapon!” It depicts the face of Marielle Franco, a city councilwoman and former popular educator in Rio de Janeiro assassinated in 2018. (Photo by Alice Taylor.)

The so-called Tsunami da Educação (Education Tsunami) protests of May 2019 and May 2020 are a case in point. Not long after entering office in January 2019, Bolsonaro attacked public education, severely cutting scholarships and budgets. On May 15, 2019 — and in several more protests in the following weeks and months — tens of thousands of youth and student activists took to the streets in every Brazilian state and the capital, Brasilia, chanting and raising banners to insist, “education is not a commodity” and “our weapon is education!” Inspired by popular education approaches, young activists and politicians in Rio de Janeiro spoke in public classes before marching down central streets.

“Classes will be in the street!” Protests from May 30 and June 14, 2019: during the pandemic youth activists are providing dozens of popular education classes and engaging in other forms of activism online. (Image left from estudantesninja social media, photo right by Alice Taylor.) 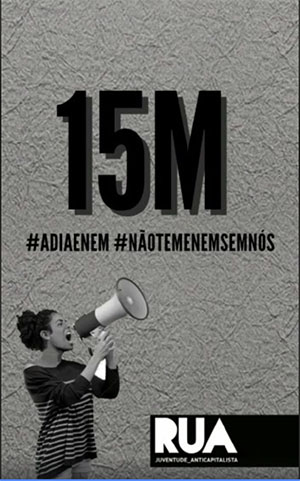 Digital poster from RUA Anti-capitalist Youth Movement, calling to postpone the ENEM and “No ENEM without us.”

Fast forward to May 2020: As coronavirus swept their nation, youth looked back to the mobilizations on May 15, 2019 (there were subsequent education protests last year on May 30 and in the months that followed.) This time, the task at hand was to postpone the ENEM, Brazil’s primary university entrance exam. For 50 days, youth and student activists posted messages through campaign videos and organized a signature campaign which gathered over 350,000 supporters. A central site rallied over 4,000 campaigns and schools across the country to protest “no classes, no ENEM,” and provided statistics on how administering the exam as scheduled would more deeply divide the already unequal access to universities and education: 80% of state high schools have not held classes, and 42% of Brazilian youth lack computer access (with numbers up to 70% in the poorest communities.) By late May, the Senate voted to delay the exam.

Youth movements were digitally savvy long before the coronavirus, but the ways in which they are transforming activism is shifting the very nature and meanings of collective organizing in surprising ways. Since the first days of the pandemic, they have organized dozens of popular education courses, debates, events, and workshops that include scholars, activists, and politicians. Their approaches to addressing multiple grievances offer important lessons for other quarantined activists seeking social change across the world.

The puzzle of how to mobilize from a distance against the injustices that coronavirus exposes is one that Brazilian youth activists face together with organizers across the world. Some reporters have described protests as quieted, on hold, or “forcing activists to innovate.” Latin Americans in several countries revived traditions of pot-banging from their windows (panelaços or cacerolazos). Activists in Poland and Israel held socially distant protests. In Hong Kong, activists inserted pro-democracy messages in video games. In the U.S., health and other essential workers held strikes. Anti-government protests that began in Chile in October continued as activists projected images of protests onto buildings. Similarly, in Brazil empty night streets glowed with projections of Bolsonaro’s pandemic-denying rhetoric on tall buildings.

From the distribution of aid and fight to end police violence to providing and insisting upon access to education, from social media to new digital platforms, Brazilian youth activists have hardly remained quiet. The pandemic has heightened the need to defend lives already at risk. The ingenuity of youth activists is impressive, but the full burden cannot be left once again in the hands of the poor, youth, and unemployed who are often at the forefront of Brazil’s popular movements. As youth re-imagine a more equal society, they emphasize organize collectively; this organizing is shifting the very nature of activism, education, and everyday life in both transnational and local spaces.

NOTE: This blog post was written prior to the series of street protests that began in late May in nearly 150 cities across the U.S. after the police murder of George Floyd and others, and against ongoing racialized violence. Protesters now must weigh pandemic risks with outrage at police violence. Even as protesters return to the streets, digital activism continues to shift and be shaped by these events and the pandemic. In Brazil, young activists are protesting in solidarity and making parallels with the multiple killings in both countries. They simultaneously insist #vidasnegrasimportam in Portuguese, and #blacklivesmatter. Latin America matters for Black Lives Matter. 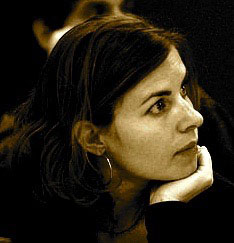 Alice Taylor is a Ph.D. Candidate in the Graduate School of Education. Her work examines education, social movements, and critical studies of race, class and gender. She is affiliated with the Federal University of Rio de Janeiro’s Núcleo de Estudos de Trabalho. She lived and worked in Brazil from 2010-2016, and received the CLAS Summer Field Research Grant (2017, 2018).