Measuring an ungurahui leaf as part of the research. This one measured 8.81m long.
(Photo courtesy of Giovanna Figueroa.)

The Amazon basin is known to be the world’s most biodiverse region, harboring a variety of flora and fauna. Recent fires in the Brazilian Amazon have brought a lot of attention to the ways in which forest resources are managed and the rapid loss of tropical habitats due to deforestation. While it is true that we must act quickly to protect this ecosystem, the notion of a “pristine” forest that is often presented in popular news can be misleading. In actuality, humans have been managing the forest and domesticating plants for at least 10,000 years. (1) The main difference between then and now is the ways in which humans are using the forest.

Through the generous support of the Center of Latin America Studies at UC Berkeley, I was able to spend three months in the Peruvian Amazon studying an economically important palm tree, Oenocarpus bataua, locally known as ungurahui. This tree provides both humans and animals with a nutritious fruit, rich in protein and oil year-round. Additionally, its trunk and leaves are used for construction and crafts. The ecology of this plant is interesting, as it is the 7th most abundant tree species in the Amazon basin, found in Venezuela, French Guiana, Brazil, Colombia, Peru, and Ecuador. It is part of a subset of 227 species of trees which are considered hyperdominant, because they are much more abundant than the rest of the estimated 16,000 tree species in the region, and together make up more than half of the individual trees found in the Amazon. (2) Put another way, 1.41% of the estimated 16,000 tree species are very common, and the other 98.6% of tree species are rare. Being hyperdominant and economically useful isn’t unique to ungurahui. Studies have found that plants which are used by humans tend to be hyperdominant, and archeological sites have a higher proportion of hyperdominant tree species than surrounding forests. (3)

At the crown of an ungurahui.
(Photo courtesy of Giovanna Figueroa.)

This begs the question, are these plants abundant as a result of human management or have humans simply learned to use the resources which are most readily available to them? Perhaps this pattern could be due to some combination of human management and the overall ecology and survival strategy of these plants. These are the questions that initially brought me to Peru to study ungurahui. There has been a notable increase in demand and consumption of Amazonian products around the world (think açai), from which ungurahui is not exempt. Its pulp is used to make ice cream and oil for hair and cosmetic products in areas outside of the its natural range. In order to keep up with the demand, some people have turned to cutting down trees to harvest the fruit instead of traditional climbing methods. What are the possible implications of recent changes in human management of this hyperdominant species?

In order to begin answering these questions, I started working with a local pulp processing organization – Recursos Amazonicos Frutales (RAF SAC), based in Iquitos. They have designed specialized palm climbing gear, called a maquisapa, which makes harvesting fruits both safer and easier. RAF SAC personnel go around to communities where ungurahui is found and provide training workshops on how to use the maquisapa. They then work with these communities to purchase sustainably harvested fruits from them, which are processed, frozen, and sold around Iquitos.

I targeted communities where RAF SAC works, which are found along different watersheds, to collect O. bataua fruits, leaves, and soil samples. I also recorded census data to understand how ungurahui varies in different locations and habitat types. My research began in San Juan de Raya (Raya), a community of about twenty houses found on the bank of the Río Pintuyacu. I teamed up with a resident of Raya who helped me find a population of Oenocarpus bataua about 30 minutes upstream. We used the maquisapa to climb the trees and a special pole saw to collect fruit samples and leaf tissues, which will be used for genetic analysis and to make herbarium specimens. After talking to a few locals from Raya, I learned how local changes in the weather affect the time for fruit to mature — more rain speeds up the ripening process. I was taught how to prepare chapo, a traditional beverage, which is made by macerating the pulp in a small volume of water and drunk with sugar and dried manioc. The chapo was shared with the community, but I kept the seeds for subsequent analysis and experiments after the collection trips. 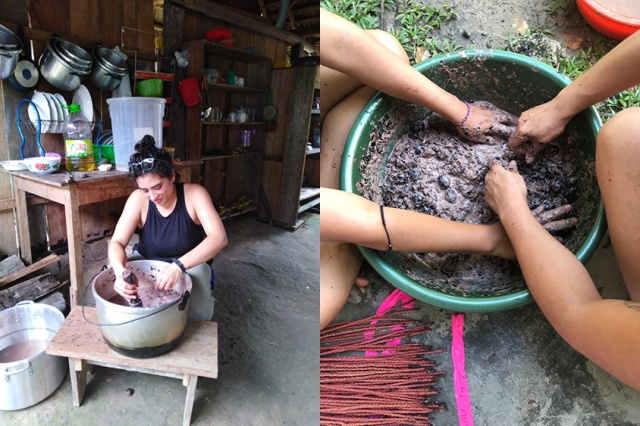 Making chapo de ungurahui by macerating fruits in water (left), and picking out seeds from macerated pulp mixture to use for germination experiments (right).
(Photos courtesy of Giovanna Figueroa.)

After a few days back in Iquitos, where we sterilized and froze the collected fruits, our team arrived in Nueva York, a larger community found on the Río Tigre. We had heard that the fruits from this site were different in texture and produced more oil than fruits from other regions. Locals confirmed this, but we were not able to find any trees bearing mature fruits to see for ourselves. We learned that felling trees is more common than climbing there, which we were able to confirm during our search for fruiting trees. The only trees which had any signs of recently producing fruits had been cut down.

Our last two trips along the Ríos Blanco and Ucayali were completed in October 2019. We were able to census and collect from three ungurahui populations, and found two other Oenocarpus species, O. balickii and O. mapora, that were also sampled. Using all the seeds from the collecting trips, I set up a manipulative experiment aiming to understand how density, distance, and different origin sites affect seed germination and survival. These will be monitored while I am offsite by local collaborators.

I will be collaborating with researchers from the Institute of Research and Development in Montpellier, France and the Instituto de Investigación de la Amazonía Peruana in Iquitos to perform nutritional content studies on the fruits that we collected. We will also be extracting and sequencing DNA from leaf samples in order to get a better understanding of the ways that humans and the environment influence one another. I will be returning to Iquitos in a few months to continue collecting and monitoring the progress of my experiment.

Giovanna Figueroa is a Ph.D. candidate in the Department of Integrative Biology at UC Berkeley. She specializes in tropical plant ecology, specifically understanding drivers of plant abundance and diversity patterns in Amazonia. She has worked in the Peruvian Amazon since 2018 and will continue to expand her work there and in other Amazonian regions for her dissertation.

Giovanna is a recipient of the 2019 CLAS Summer Field Research Grant.