On February 25, the UC Berkeley Center for Latin American Studies hosted author Isabel Allende and Berkeley’s own Adam Hochschild to discuss the publication of Allende’s newest novel, Largo pétalo de mar (A Long Petal of the Sea). Published in 2019, the work is the most recent of Allende’s approximately two dozen novels and once again proves her ability to capture and process through fiction the drama and tragedy of real historical events. Despite her status as one of the world’s great literary figures, Allende exudes a disarming wit and a charming charisma. As she spoke before an excited audience of 300 people, her words throughout the evening wove together both humor and substantive contemplation. Punchy jokes ran alongside her more somber reflections on some of the tragic chapters of Latin American and world history in the stories which fill her books.

While I aspire to neither spoil the story of her new novel nor dare to think that I could concisely summarize the contours of a literary work à la Allende, the context in which Largo pétalo de mar is set goes something like this: in April 1939, the right-wing nationalist alliance led by Francisco Franco achieved victory in the Spanish Civil War, which had raged since 1936. The violence and suffering produced by the war led to the exodus of hundreds of thousands of Spanish refugees sympathetic to the left-leaning Republican coalition fighting against Franco. Many fled to France, where they were interned in concentration camps and forced to live in squalid conditions. Watching this crisis unfold was another giant of Latin American literature, Pablo Neruda, who at that moment served as a Chilean diplomat in Paris. Disturbed by the experiences of and sympathizing with the Spanish Republican refugees in France, Neruda, with the endorsement of the Chilean president, personally orchestrated the migration of 2100 of these individuals to Chile. Neruda acquired an old ship, the SS Winnipeg, which set sail from France in August of 1939 and arrived in the Chilean port of Valparaiso a month later. In a twist of historical coincidence too dramatic to make up, the Spanish refugees disembarked the Winnipeg in Chile on September 1, the very day that Germany invaded Poland and ignited the Second World War. Many of the 2100 on board resided in Chile for the remainder of their lives. Allende’s novel seizes the chaos and tragedy of this moment and narrates the stories of those on board as they sail across the Atlantic and begin their lives anew in Chile.

A packed room listens to Allende and Hochschild, February 2020. (Photo by Peg Skorpinski.)

I am inevitably giving short shrift to the premise of the story Allende tells, but at least for me, grasping the history embedded in her work of fiction was central to understanding the lessons Allende sought to impart to her audience that night. The evening developed as a casual conversation between Allende and Hochschild before they both fielded questions from the audience. However, underneath her layers of charm, charisma, and humor, Allende’s words touched on numerous themes whose contemplation asks for a more serious response. 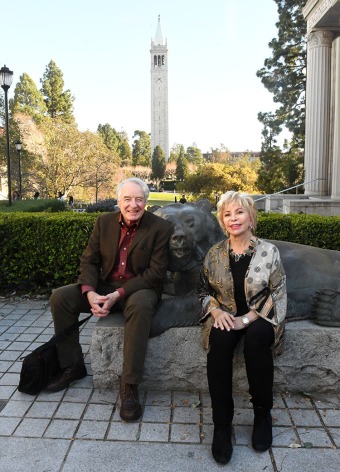 The aspect of Allende’s dialogue that most impacted me was her discussion of migration, mobility, and displacement; a trio of experiences to which she herself has extensive exposure. Allende narrated how she was born in Peru in 1942 and raised in Chile, where she matured as an author across her early life. She was then exiled to Venezuela after the coup d’état in Chile on September 11, 1973, which brought Augusto Pinochet’s right-wing military junta to power. Allende was one of thousands of Chileans who left during Pinochet’s 17-year dictatorship. While residing in the U.S., and now an American citizen, Allende transparently described how the trauma of exclusion from her own country informs her aspiration to process these experiences, which are shared by millions of refugees across the world, through the characters in her novels. Informed by her own experience, Allende thus conceives characters whose stories comment upon the feeling of a person displaced. She noted that her perseverance through years of exile was based on her philosophy that “we all feel pain, but suffering is optional.” On the broader point of exclusion and the tens of millions refugees across the world today, Allende called for the acceptance of people whom certain nationalist ideologies ostracize, and for reigning in the unchecked power of government officials. “My obsession since I was very young,” she asserted, “was justice.” One cannot separate the call for action implied in her words from a critique of the attitude towards immigration espoused by certain U.S. policy-makers today.

To say that the past remains with us is to repeat a truism. Even when articulated by a historian such as me, who is all too eager to point out the pressing lessons of history, it feels too obvious to need saying. Yet Allende assured that, among the crowd of 300 gathered to hear her speak, the weight of the past hung over the evening. Indeed, the author stated that she can only write fiction based on historical events. The vast majority of her work takes some inspiration from the human past, and Largo pétalo de mar sits alongside her previous novels (such as La isla bajo el mar, which takes place in the Haitian Revolution), in telling through fiction individual stories which could very well have happened.

Invoking though fiction the historical experiences of refugees in order to contemplate the world’s migration crisis today certainly leaves one exasperated and disheartened. However, Allende’s brilliance and inspiration as a public speaker lies in her ability to weave together tragedy, optimism, and humor. Despite raising these pressing themes, Allende left the crowd in Berkeley with a ray of hope, assuring that “we have seen the curve of history, and it goes up.”

Evan Fernández is a Ph.D. student in UC Berkeley’s Department of History, studying the history of Latin America, particularly Chile and Peru, as part of the Pacific world. His current project explores the Chilean sodium nitrate (salitre) industry and the sale of nitrates to Japan in the late nineteenth and early twentieth centuries. Evan also is working on a project concerning the Peruvian-Chilean border dispute in the 1920s and international relations in the Americas in the early 20th century.