Venezuela: On the Supreme Court in Exile and the Violation of Human Rights 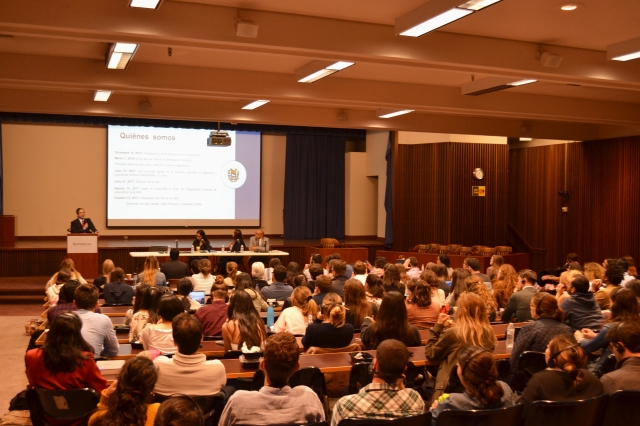 Associate Justice Domingo Salgado explains the legal basis for the Venezuela’s Supreme Court of Justice in Exile and its inner workings. (Photo courtesy of the Berkeley Law special committee).

“This fight is not about ideology. It is about democratic, constitutional legitimacy.” These were the first words uttered to the crowd in a packed auditorium on Wednesday, April 10, 2019 for a talk on the Venezuelan crisis. The event, called “Venezuela: Supreme Court in Exile and the Violations of Human Rights”, was presented by a panel of distinguished speakers: Judges Domingo Javier Salgado and Jose Sabino Zamora, members of the legitimate Supreme Court of Venezuela currently in exile, and Tamara Sujú Roa: a Venezuelan criminal lawyer and human rights specialist. The panel was moderated by Gisela Pérez de Acha, a human rights lawyer, journalist (specializing in online freedom of expression in Latin America) and member of the Human Rights Center currently studying data interfaces at UC Berkeley’s Graduate School of Journalism on a Fulbright scholarship.

Judge Domingo Javier Salgado, who served as Vice President of the Electoral Chamber of the Supreme Court of Venezuela, was the first to address the audience, starting by explaining the illegitimacy of the current Supreme Court. He told how he and his colleagues fled the country under fear of persecution and pointed out that he couldn’t share all the details of their departure as others are still trying to get out. Salgado spoke of “unheard-of institutional parallelism”, and countless human rights violations currently taking place in Venezuela. “Every single human right has been violated. If there are any rights that haven’t been violated, it’s just because they don’t exist. There are no basic guarantees. Anyone can lose their life over a pair of shoes. All humanitarian channels have been cut off,” said Salgado. “We want the constitution to prevail for the rule of law to exist,” concluded the Supreme Court Justice.

Tamara Sujú Roa presented an overview of human rights violations currently occurring in the country. She distinguished between torture happening in the times of Chavez and what is happening under the governance of Nicolas Maduro: “With Chavez, we had selective repression, starting with his military supporters, journalists, and other agents that opposed him. I defended torture victims in Venezuela who testified that they saw Chavez in the room where they were being tortured,” said the human rights lawyer. “With Maduro it’s different, there is general, systematic repression, involving almost all governmental branches as well as foreign agents. There is extreme torture in jails that doesn’t differentiate between sex, age, physical condition, civilians or military,” Suju continued. She has compiling torture cases registered in Venezuela between 2002 and 2014 and formalized a demand against Nicolás Maduro in the International Criminal Court on July 2016. “In order for a claim to have merits at the ICJ, the persecution needs to be carried out in a systematic way by the government towards the civilian population. This is what is happening in Venezuela. Crimes against humanity have been committed,” she added, and called for every citizen to be vigilant about safeguarding democracy and not allow institutions to be manipulated.

“History will right us,” proclaimed Jose Sabino Zamora, a Chief Justice of the Anzoátegui State Circuit of Venezuela from 2003-2005, who had to spend a lot of time underground in fear of execution before managing to leave the country and seek asylum in Panama. “5.5 million Venezuelans eat only once a day. Three million eat garbage. There are no medications, the minimum wage is five dollars. International and national laws are not respected. You can’t survive,” said Zamora. He then proceeded to explain the legitimacy of the Supreme Court currently in exile: “This Court is the one based on the Constitution. All conditions of democratic election and constitutional appointment were followed for the members of the original court currently in exile. None of those happened for the new court. The Constitution is the foundation of democracy. It has to be respected.”

The panel then opened up the floor for questions, and received an enthusiastic response from the audience, ranging from human rights claims to international policy and relations with neighbor states. When a law student from Mexico asked, “How can we help?”, the panel’s response was unanimous: “You don’t need to take a stand. What is more important is important to be informed, spread the word about what is happening. That is how you help. Get informed, research, spread the word, care. That will be enough to get the conversation started.” And indeed, the conversation certainly got started in Berkeley Law.

ELENI ANAGNOSTOPOULOU is a practicing lawyer and journalist from Athens, Greece. Having completed her LL.B. and LL.M. in Contract Law in the National and Kapodistrian University of Athens, she is currently an LL.M. at UC Berkeley on a Fulbright scholarship, with a specialization in Law & Technology. She focuses on Media and Technology Law and is a passionate advocate of freedom of speech.