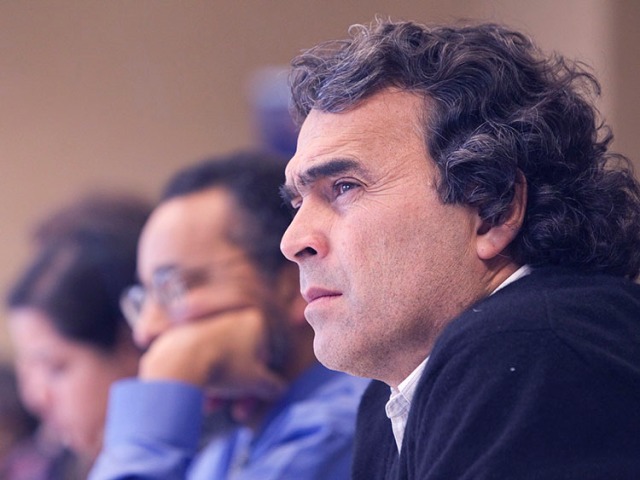 The following is an edited transcript of an interview that took place on August 25, 2016 between Professor Harley Shaiken of UC Berkeley and Sergio Fajardo about the peace deal between the Colombian government and the FARC that was signed Wednesday evening.

Sergio Fajardo recently stepped down as governor of Antioquia and was voted “Best Governor” in Colombia.  Formerly, he served as the mayor of Medellin (2004-2007) and was a vice-presidential candidate in 2010. He holds a Ph.D. in Mathematics from the University of Wisconsin, Madison.

Sergio Fajardo: A few things can be singled out as very relevant for Colombia, in terms of negotiating the peace process. This was a very well designed process in many ways. One thing that has to be pointed out is this is a process that is taking place with a lot of advances in the world regarding human rights and international law — all these new conditions — that I think are crucial for world development. They were taken into account.

We have had peace processes before in Colombia, for example the process, which reduced harsh conditions to a general amnesty. (It reduced them. It wasn’t trivial.) With that process you had to take into account the international laws. There wasn’t such a thing as a general amnesty, and it had to fit within the law. And that was an advance that was crucially and carefully crafted so that it could stand up in front of the international community.

That is another point that is crucial here with the current process: It was important to have the international community involved in the negotiations as well as rallying behind the peace agreement and the Colombian government. The support has been very important. And it’s very important for Colombia.

At the same time it is a process that is carefully crafted. It’s very well organized. It is usually difficult to negotiate a process such as this one after more than 50 years. It’s very difficult to come to terms with what has happened. This agreement has many details that answer questions that are usually left out when negotiating, which is important because if you don’t include them then they become a real problem when it’s going to be implemented. And of course there is leeway in there, but there is plenty of exactitude in the design of the process. There will, of course, be many loose points left out that will translate into other problems when we come to terms with it.

And finally, it is a process that solves a more than 50-year problem. I mean, in Colombia we have had the FARC as a main actor in life for more than 50 years. And it’s an actor associated with a negative condition in many senses. So it [the agreement] allows us to turn the page definitively, in spite of all the difficulties. There are natural difficulties and it’s a complex process, but in spite of all the perturbation that we have in Colombia, and the polarization, it’s quite an advance for us in Colombia. As a society it’s an opportunity for us.

Harley Shaiken: My second question would be: The plebiscite for ratifying the agreement is scheduled for October 2. What do you view as the central challenges between now and that plebiscite?

There is quite a reaction — a negative reaction — led by President Uribe and his political group. They have been opposing some of the conditions in the agreement and are very relevant political actors in Colombia. They have a lot of followers. And there is a confrontation with the National Government at a time when the image of President Santos is quite low with regards to the Colombian people.

So explaining in the middle of this confrontation, having the wisdom to show the real profit of where we are going as a society by signing, and being able to overcome particular details that are troublesome, naturally troublesome, and show the whole picture will be challenging. Many people have to get involved, even those of us who are for peace, but don’t belong to the unity government that President Santos leads, have to show support.

We have to understand something that is crucial: The way we handle these times is going to represent the way we are going to live and what lies ahead for us. And we have to have the ability to understand the orders, to listen to the orders, and stop doing something we usually do which is think, ‘you think differently than me, then you’re my enemy.’

And that may sound simple, but it will be quite a challenge and change for our Colombia society. I think those are the challenges for October 2. I think it’s going to be successful but it has to be worked out and we have to take the time and have the patience to show the Colombian people that this is quite an advance for us.

HS: And finally, post October 2, I know — impossible to predict — what do you think the challenges will be to build a new Colombia post-ratification?

We claim that after ratification, the signing, and the final ratification — that’s the moment to build peace, and it has to be built in the territory. This is as a new chapter in our Colombian life is going to force us to relate among ourselves in a different way. We have to understand what it means to be at peace in the territories. I’m talking about those places in Colombia that have not been the subject of the state’s special attention — like the agricultural sector, which has been underdeveloped for decades. But, the first challenge will be reconciliation. How are we going to handle differences? How are we going to pay attention to and honor what is signed?

For example, there are many conditions that require money we don’t have at the moment. Colombia is going through a difficult economic situation, so we have to be able to reconcile the terms and translate the agreement into concrete, practical, real steps that allow us to see that we are implementing what we signed. That requires a lot of political subtly and agreements so that it works and it doesn’t become a disappointment and then a new confrontation. That’s crucial.

Then I think a key point in Colombia right now is the fight against corruption. There is a growing sense of corruption as a very bad characteristic of the political world in Colombia. And if you look at the polls where people are asked about what they think about different institutions, at the lowest levels of opinion you will find President Maduro, FARC and politicians and the congressman. And that’s very bad when politicians, congressman, and justice are held in such low regard by society. It means we are in trouble. We have to work on that and the fight against corruption is a central and crucial need for the Colombian people. There is a lot of indignation associated with it.

And then finally, we have to avoid becoming trapped by the process because there are many aspects of development in a society. We cannot start living only in terms of FARC and the agreement from here on for 10 years. FARC has to become part of the political spectrum in Colombia. That’s the spirit of this negotiation: They can bring their ideas without guns and weapons and we will be discussing Colombia and some of its very pressing needs, in particular our focus on education as an outstanding factor.

After turning the page of destruction, let’s give ourselves the opportunity to write a new page — one that has education as the base of the whole thing.